Machesney Park, Illinois, USA-October 17, 2019—Hennig broke ground on a new 125,000 sq. ft., $17 million manufacturing facility at the company's 9900 North Alpine Road global headquarters location. The new building will house Hennig backup power generator packaging operations. This expansion, by far, is the most ambitious investment in the history of the company.

Hennig plans to expand its opportunities to provide turnkey integrated enclosure & fuel tank systems for the backup power generation market. Particularly, the data center segment of the market has emerged as the greatest opportunity for Hennig’s growth. The data center market is dominated by the largest high-tech companies that are in the news today, but many smaller data center companies are also seeing fast-paced growth.

The hyper-scale data center business is absolutely booming,” says Robin Moore, COO of Hennig Enclosure Systems. “Some of these companies are spending billions of dollars per year on data storage facilities. The generator packaging requirements for backup power at these facilities are greater than our industry can produce.”
Hennig’s new building will be a state-of-the-art facility with 285 tons of crane capacity, a two-story office space, generator testing capabilities, and ample outdoor storage space for work in process and finished product. Hennig will make a large investment in capital equipment as well. This will include the addition of various types of sheet metal fabrication equipment such as lasers, folding machines, welding machines, and powder coat paint systems, along with an array of assembly and electrical equipment.

Hennig plans to hire a large amount additional staff to support a three-shift operation that will bring many new job opportunities to the Machesney Park community. Positions will need to be filled throughout the organization including machine operators, welders, paint technicians, assemblers, electricians, and an array of manufacturing support personnel and engineers.
Cord Construction is the general contractor for the project with McClellan Blakemore Architects and Arc Design Resources, Inc. contributing with the building design.

The completion of the project is planned for June 2020.

Check out the progress. 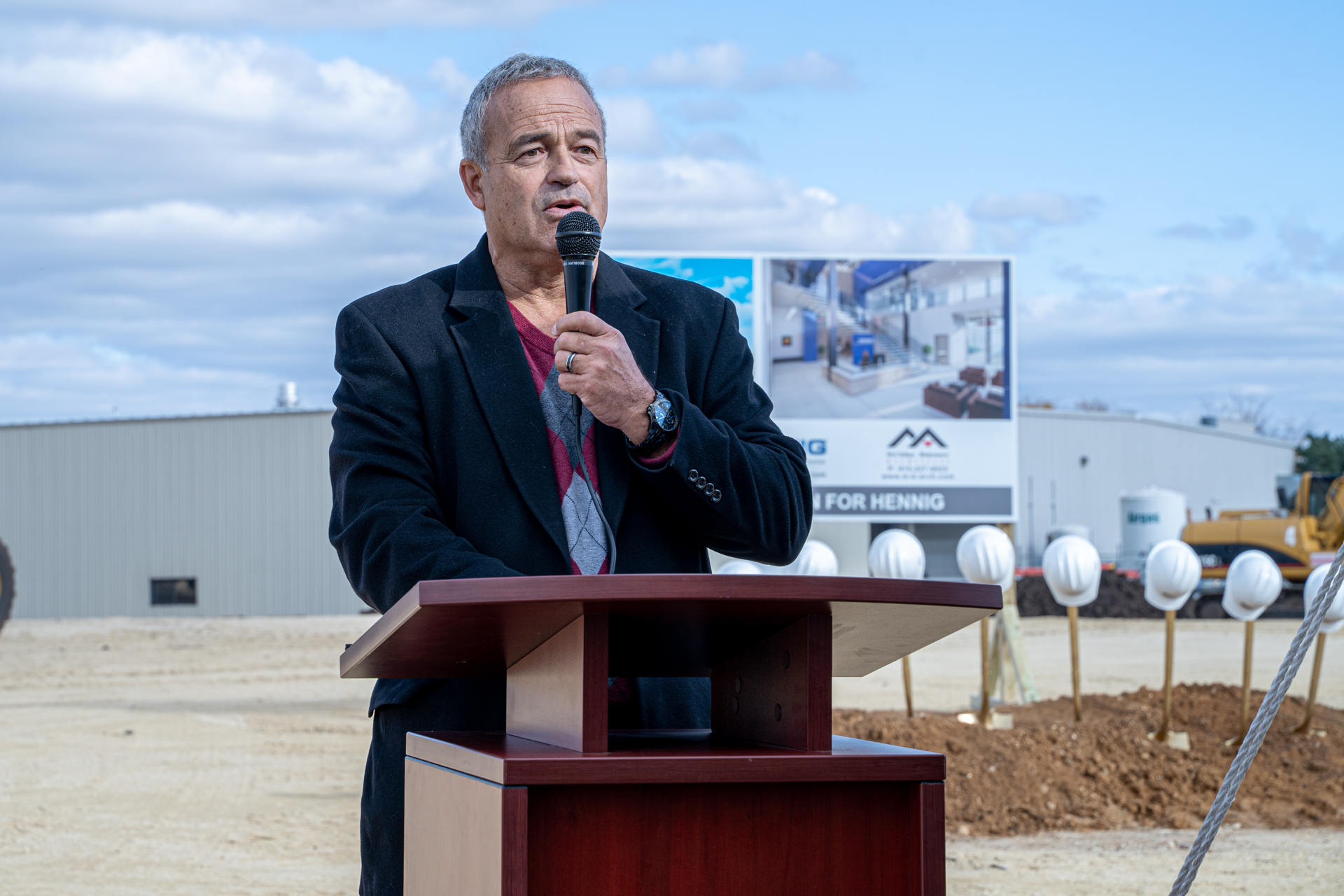 Dietmar Goellner talks about Hennig's expansion and what it means for the community. 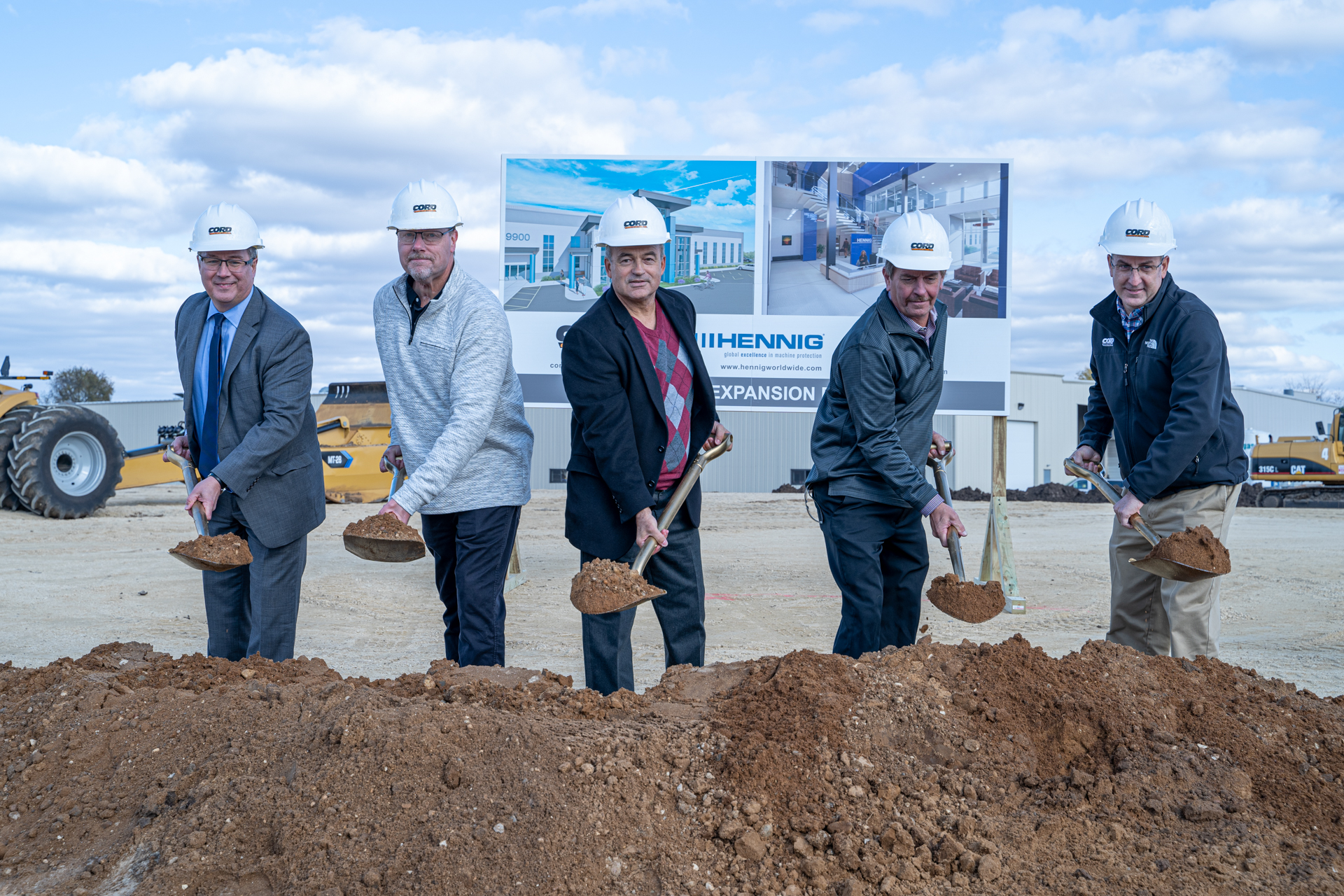 Machesney Park, Illinois, USA-September 27, 2017—Hennig announced today that it is breaking ground on its new 125,000 sq. ft., $17-million manufacturing facility, which will house its back-up power generation (Genset) production and the additional two-story office space. This expansion, by far, is the most ambitious investment in the history of Hennig.

The company will provide a turn-key integrated enclosure system for the back-up power generation sector. The data centers market has emerged as the greatest opportunity for growth. It is dominated by the large high-tech companies that are in the news every day, but also smaller data center companies are seeing fast-paced growth. Data centers require a massive amount of power backup and the demand for generators has been exponentially growing in the recent years.

“The hyper-scale data center business is absolutely booming,” says Robin Moore, COO of Hennig Enclosure Systems. “The companies are spending billions of dollars per year on data storage and the generator packaging requirements for back-up power are higher than our industry can produce. Customers want much higher quantities of generator enclosures, and the expected delivery time is getting shorter.”

Hennig’s ability to produce its high-quality product at the pace these giant corporations require, would not be possible without a large increase in manufacturing space. This has led the company to make a decision about adding a new, state-of-the-art facility, which will be focused strictly on Genset business and will become a first crucial step to launching into this “hyper-scale” opportunity.

The new facility will also have testing capabilities, with the ability to test two large generators at the same time, and a sizable storage area for the finished product. Hennig plans to add up to a hundred new jobs to the Machesney Park community.

Cord Construction is the design builder for the project. McClellan Blakemore Architects designed the building. Special credit to Arc Design Resources, Inc. in helping with the building design.

The completion of the project is planned for June 2020.

The groundbreaking ceremony will take place on Thursday, October 17 at 3:00 pm at Hennig’s 9900 North Alpine Road in Machesney park, IL.